Fresh off the UPS truck and out the door of my local gunshop, my Remington M2010 barreled action is home where it belongs. This this Remington Barreled Action is the heart of the United States Army M2010 Sniper Rifle, formerly known as the Remington XM2010. 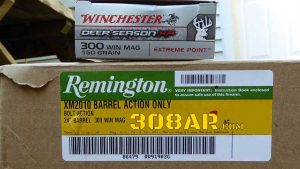 My plan for this M2010 is to mate it up with a Cadex Defence modular chassis system to closely emulate the XM2010 Sniper Rifle. There will be differences though as my end use is that of a civilian and not a US Army sniper.

The M24 is based on the legendary Model 700™ and 40-X™ rifles. Its unmatched accuracy and reliability have made it the standard in long-range tactical situations. Over 15,000 sold since 1988. The Remington Sniper Weapon Systems make outfitting your operation efficient and simple.

From the basic M24 Sniper System – the standard for the U.S. Army since 1988 – to the advanced M2010 configuration, we include the world-famous rifle and all the premium, service-proven components you need. Remington® was awarded the U.S. M2010 Army Enhanced Sniper Rifle (ESR) contract in September 2010 to reconfigure up to 3,600 M24 Sniper Weapon Systems after a full and open competition.

Designed as an upgrade to the venerable M24 SWS, the M2010 comes configured with the Remington® Arms Chassis System (RACS). The M2010 gives the sniper greater capability, lethality and flexibility offered by the 300 Winchester Magnum round, a detachable box magazine, a Leupold® variable powered optic, full rail systems for mounting of ancillary equipment and signature reduction in the form of an AAC TiTAN QD suppressor.