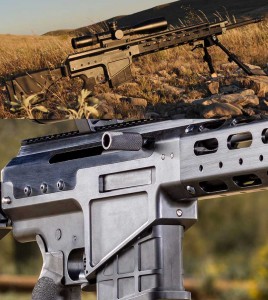 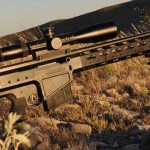 What is the Alexander Arms Ulfberht?
In full Alexander Arms® tradition, we have taken strides to introduce a weapon to the firearms market that has not been seen before. In following the footsteps of .50 Beowulf®, 6.5 Grendel, and our AR-15 .17 HMR, we would like to introduce you to Ulfberht, which has been called the most innovative weapon design introduced to the firearms industry in over two decades and has also been awarded 2015 Rifle of the Year! Ulfberht is a semi-automatic, magazine fed, gas piston operated, long-range precision rifle utilizing the ever popular .338 Lapua Magnum cartridge 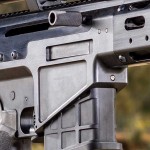 How is it designed?

Mechanically, the rifle is extremely simple, having only 48 individual parts and only ten moving parts that need to be maintained. Its mechanism is based on the Russian DP 28 machine gun. The simple, but reliable gas piston operating system of the DP 28 machine gun has been inverted and refined in Ulfberht to feature magazine feeding. An adjustable gas system allows users to operate the weapon in a variety of environments and situations, including extreme heat, extreme cold, and suppressed for all standard .338 Lapua Magnum loads of ammunition as well as hand loads.

We have designed and produced each component to the very highest quality possible to ensure a very long life. To absorb the stresses of high pressure loads, the barrel is press-fitted into the receiver effectively providing a breach of 1.75 inches in diameter. The bolt does not rotate, but is locked into the receiver by two heavy, steel flaps. The receiver is made of steel and this was selected as the best method to support the long, heavy barrel; to resist the operating pressure in the barrel; and to lock the bolt. By combining these functions and not relying on a barrel extension and light alloy receiver, we achieved the best optimization for the strength and weight of the weapon. It is possible to build a lighter weapon at the expense of durability. It is not possible to build a lighter, stronger weapon.

To create an extremely reliable and soft-shooting system, the gun uses a constant recoil approach whereby the bolt assembly only just runs to the back of the receiver. The bolt assembly moves nearly twice the cartridge length. Please review the technical specifications page for further components details.

Why is it special?

We have created a rifle that can capably, readily, accurately, safely, and simply place multiple shots on target at distances of up to 2,000 yards in a matter of seconds. It achieves all of these things without compromising the core needs and expectations of shooters. In balancing design, function, and ease of use with superb metallurgy and components, we have created the optimal rifle for the needs of military personnel as well as long-range shooting enthusiasts worldwide.

We have designed the weapon to have relatively low recoil, allowing the shooter to watch his or her own shots impact their target. We have designed components to operate perfectly in both extremely cold and extremely hot conditions. Safety of the shooter is not spared: the weapon cannot be fired out of battery. Accuracy and follow-up shots are paramount and we have proven it multiple times by placing four consecutive hits on a 12-inch target at a distance of 1,400 yards in only 3.5 seconds.

Why the unusual name?

Undoubtedly, we will be asked the reason for choosing such a strange name for this rifle. We have traditionally bestowed names of Norse legend and history on our innovative products. Ulfberht is the name of a very unique type of sword produced by the Vikings of Scandinavia between 1,000 and 1,200 years ago. The sword was made of steel uncommonly strong and durable for its time. Swords of its quality would not be seen again for nearly 1,000 years. To this day, it is considered by some experts to be one of the best swords ever made. We think the name is more than fitting for our new rifle as it shares many of the same attributes of the sword that was a pinnacle of weapon evolution.