For over 30 years Drake Associates has had a long history in the ordinance and defense related industry. Originally specializing in the coordination and introduction of proven and fielded Europe technology to The US military and it’s defense contractor family. Initially this activity focused on machinery and components for ammunition, rifle systems, fuses, grenades, crew served weapons and training.

Drake Associates has had a long and continuing involvement with the VISTA group from early evaluation of Savage production in the 1980’s, the supply of ammunition machinery to Federal and 10 years of strategic supply of brass components to ATK- Lake City. Drake Associates is currently working with Federal on certain aspects of the” Factory of the Future” for rifle case manufacturing. 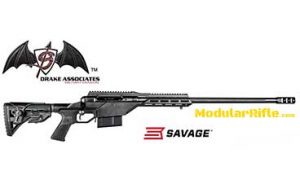 In the Mid to Late 1990’s Drake Associates was a participant in the competition for the M107, .50 caliber sniper rifle as a partner with PGM Precision and in mid 2008 to 2011 were a partner and technical expertise-know how source with ATK Lake City and Federal Cartridge for the SOCOM PSR sniper rifle competition.
During this time Drake represented the PGM Precision Company and Rangemaster Precision Arms Company with deliveries to the U.S. State Department, United States Marine Corps, U.S. Army Special Forces Units and other MIL / LE and civilian customers.

The success on these markets lead us to develop a competitive civilian product line that could incorporate our tactical MIL/LE expertise into a highly accurate, affordable, modern platform. Drake saw firsthand what technologies worked and what did not work with long range precision sniper weapon systems. We had the insight and contacts to understand the requirements of the PSR solicitation and realized that the civilian long range shooting community would follow on as well.

The result was the Drake Stalker Sniper rifle that initially incorporated the use of a Cadex brand Strike Series chassis platform with a highly modified Remington 700. This system filled the gap for the US Military Sniper Teams needing a competition ready custom gun that was familiar in appearance to the newly adopted M24E / XM2010 .300 Win Mag system but with many improvements over what was being delivered to the military under contract. The Drake Stalker Rifles were used as competition guns and deployment rifles for sniper teams and civilian long range competition shooters alike.

Initially we called upon MDT Modular Driven Technologies to design a special Drake variant of their proven and popular LSS model. We added many features and modifications that were adopted from our experience in the US Military and Special Operations community. The chassis system also incorporated a Left Hand / Right Hand design. These chassis were exclusively built to Drake Specifications by the MDT team. We called this new platform the Hunter Stalker LWSS and it was designed “For Snipers by Snipers”. We then combined this new Drake Hunter Stalker LWSS with off the shelf Savage Model 10BA and 110BA barreled actions.

We initially sent these rifles out to the field with US Military Special Operations teams that wanted something light weight, extremely accurate and man portable. In Jan 2015 we received results from a team in Afghanistan that repeatedly engaged targets out to 1350 Meters with a 20” barreled .308 Savage action in our Hunter Stalker Chassis (note: The Last long range military 308 caliber record was set in Iraq 2005 at 1250m with a 26” Barreled M24)

The next generation of that Hunter Stalker, which took the Drake/MDT Hunter Stalker LWSS chassis design, and added a specific recipe for the SAVAGE barreled action. Drake incorporated lessons from real world situations and applied them to the new design. We utilized concepts learned from the US SOCOM PSR Solicitation and added newly developed high ballistic coefficient bullet data and applied this to a specific barreled action. Again the results were outstanding.

This brought Drake into a more direct relationship with Savage Arms who incorporated these improvements into the Drake Mod for the Model 10BA and 110BA. This Cooperation improved the performance significantly with 0.4 MOA and directly led to the outstanding performance of the US Army NG WTC sniper team at the 2015 US Army International Sniper Competition at Fort Benning, GA and the success of a premier Rhode Island SWAT Team at the Connecticut State Police CT SWAT Challenge in their 2105 competition during the sniper events.

The final iteration of the Hunter Stalker has been the development and upcoming launch of the SAVAGE STEALTH Long Range Tactical Rifle System. Relying on Chris Drake of Drake Associates as the “subject matter expert” and with the support of MDT and The MAKO group, Savage Arms refined the Stalker Chassis original design, developed with internal proven technology by MDT, with all the ergonomic and style features called for by the user community.

The addition of the Drake /Savage high performance recipe and development of the Savage blue printed barreled action with NEW length, twist, accuracy performance enhancements and optimization of ballistic data combined with the new Savage Stalker chassis design will have a significant market impact.

The NEW SAVAGE STEALTH will be capable of multi discipline use – Military, Law Enforcement, Civilian Long Range Precision / Competition and Long Range Hunting and will enable Savage Arms to position themselves as the industry innovator and leader in the long range precision tactical rifle market.