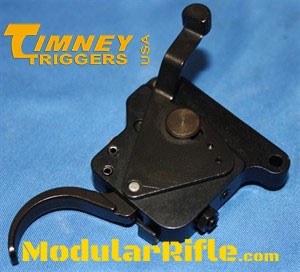 In Phoenix Arizona there is some of the nicest and friendliest people in the shooting community. These people prove on a daily basis that good old fashioned customer service is in fact alive and well. These people are within the walls of company called Timney Triggers in Phoenix Arizona. The Timney Triggers company has been in the  “Trigger Business” probably longer than anyone else, since 1946. They got their start making aftermarket triggers for Mauser, Springfield and Enfield Rifles. Today they manufacture triggers for just about every common rifle as well as some surprises like SCAR Rifles and IWI Tavor.

Recently Timney subtly announced you can throw away the Remington factory X-Mark Pro trigger and drop in the new Timney 510 Thin Remington 700 Trigger. The trigger housing  is heat treated steel and features a trigger blocking safety. The 3 pound trigger pull model is available in left and right had versions with black or nickel finish.